It’s a question I frequently ask myself, and perhaps the question should be “Should I train for a half marathon with a dodgy knee?”, but hey, I signed up for one in spite of my ongoing injury, so I thought I’d share how I’m managing that, and how I hope to get to the finish line.

Starting out as a beginner

Running was my first sport that I picked for myself. My mum had taken me to gymnastics, got me doing ballet for several years, playing tennis for even longer, and at school I played on the hockey team for some time. But running was the first sport I really decided alone that I would do. I remember the early days, as an uneducated 13 year old, leaving the house in an oversized cotton shirt and some shorts, and trying to run. I couldn’t even do a mile to begin with. I started off walk-running 0.8 miles to some crossroads and 0.8 miles back again once I had recovered. Thankfully back then there was no social media, no pressure about how far I should be running, or what I should be achieving. It was just something I started doing. I didn’t even do it with a goal to race. I just wanted to run, and feel a bit fitter (and probably lose some weight, because I was a standard insecure teenage girl).

Embarrassingly, I didn’t realise that baggy cotton teeshirts weren’t optimal running clothing until I’d left university, but my running improved at least. I improved a lot over the years, running 10 – 12 km comfortably, suffering a few set backs from ITB pain and shin splints, but generally running happy. When I started my first job, my colleagues encouraged me to enter my first 10k race. By this point, I’d done a couple of 5km Race for Life’s, but nothing more. I was terrified. I trained as best I could, using a training program on my running app, and surprised myself finishing in 52 minutes. From there (2013), my short-lived racing career started, with me completing 4 half marathons over the next 2 years, various 10k events and lots of casual running.

I don’t remember how the knee pain came around, but I definitely experienced some, and used it to take a break from running. Was it the road running wearing down my knees? Lack of stability in my ankles? Repeatedly bashing my knees against climbing walls? That awkward fall skiing where the ski didn’t detach and my knee twisted? Or perhaps a combination of the above? I’m not really sure. But come 2016, I just didn’t get into running much, and found myself enjoying spin classes, and doing loads of HIIT. I did the Body Coach 90 day program (my one and only diet experience), and really enjoyed the combination of cardio and weights. It was during this time though, I remember doing a HIIT session with my mum, who is 30 years my senior, and my knees were cracking something awful, while hers made zero noise. Something was definitely not right!

I dipped in and out of running, and started finding that the HIIT jarred on my knees painfully a fair bit. The cracking sounds had got worse, and were more like a really disgusting grinding sound. You could feel it too if you touched my kneecaps.

Sitting on a chair with my knees bent and my feet flat on the floor began to hurt. If I couldn’t stretch out my legs I was in pain. If I bumped into something with my knee the pain was so excruciating I felt like I might be sick. I stopped all forms of cardio.

The MRI had apparently shown significant cartilage damage, but not much else, and all that was suggested was some physio to strengthen the knee. I never really felt like the physio solved all the issues – I suspected that my double jointed ankles weren’t helping my knees, and so we focused on building stability and strength through single leg exercises. But when I mentioned that the cracking hadn’t gone, and that if I went on a long hike, my knees would stiffen up painfully for several days after, I was just told “not to get into positions that would cause grinding of the knee, and not to go hiking”. It’s not what a 28 year old wants to hear.

However, the pain I had been experiencing had subsided. I could now sit down without knee pain and day-to-day, it didn’t bother me. So physio ended, and I was advised to keep up the single-leg work and get back to life.

The physio had said I could try running and to stop if there was pain, but for a long time I just didn’t want to, because I was so scared of messing up my knees more. On top of that, I was getting more into gym work, lifting weights and climbing.

It wasn’t until the summer of 2018, when I went to do some Munro bagging with friends up in Scotland, that I realised just how unfit I had become, in a cardiovascular sense. I really struggled to keep up with them and felt so embarrassed at how slow I had become, huffing and puffing up the hills behind them, and constantly needing to stop.

Back home I started trying to get back into running, doing a few kilometres and trying to build it up to 5km, but struggling to find the motivation.

When I started a new job in November, I soon discovered a group of colleagues who would go out for a run at lunch times. I started to join them, and quickly got back to 5k runs, and found a new joy in running, as I’d never run regularly with other people before (sounds crazy, but it’s true!). I’d been taking it easy, not pushing the distance or frequency, kept up my strength work on my legs and doing some single leg stability work, and stopped experiencing pain. All in all, it was proving a great success!

As December came around, Dec discussed with me how we could keep fit over the worst month of the year. He has a severe weakness for mince pies, and wanted a fitness challenge that might stave off weight gain over that period – and I just over indulge at Christmas generally, so it seemed like a good idea. He suggested running 5km a day, every day of the month (and on days where we couldn’t, having to add them to our km on other days). I accepted the challenge!

It actually went really well, and 5km a day kept it manageable. I’d get a few niggles, but nothing that really worried or bothered me. I tried to stretch as often as I could, and on Christmas Day we even managed 12km around Richmond Park, and I felt great.

The quantity of running though had led me to reduce the amount of time I was in the gym, and I eventually found my strength waning, which I knew wouldn’t be good for my knees, as they needed that strength for stability around the ankles and the knee cap.

Come January, I tried to balance things out again, but over the next few months I struggled a bit to get the right balance of strength and cardio. In April, we did a mini-moon to Snowdonia, and did several consecutive 20km hikes, ascending and descending over 1000m. My fitness was much better than when we had been in Scotland, and by the end of the first day, I was surprised my knees felt ok, but by the end of the second, I really was struggling with my knees, and by the end of the third day, stairs were basically out of the question. Hiking involves so much uneven ground, big step ups and down, huge amounts of force driving through knees as you step, and we scrambled a fair bit too. None of this was great for the knees.

I became more nervous again, and took a good rest period. However, our honeymoon was “looming”, where we had a good week’s worth of hiking planned. On top of that, the Welsh 3000s were only a few weeks later, and would involve more hiking in a day than I’d ever attempted.

It turns out that hiking on the honeymoon wasn’t too bad. I’d brought knee and ankle supports with me to help if necessary, but in general I was ok without them. We weren’t trying to travel crazy distances, and so I wasn’t pushing my knees to exhaustion. Downhills were definitely slower for me than Dec, and I’d be lying if I said they were pain free, but they were manageable, and I was able to get up the next day to go again, which was the most important thing.

The same cannot be said for the Welsh 3000s. If you’ve read my review of the event here, you’ll know it didn’t do my knees any favours. 12 hours of constant uneven up and down, scrambling, ascending and descending, put so much force through my knees that they didn’t stand a chance. This was not moderation!

I had wanted to start half marathon training the week following the event, but given that I struggled so much, I thought I’d give myself time to rest.

A week after the 3000s, I still hadn’t started training. We were sitting in a cinema, and I couldn’t stretch my legs out in front of me. Half way through the film I found I was in so much pain I could barely focus on the film. I was beginning to wonder how on earth I’d ever get back to running.

A key aspect of long distance running training is to build up the distance gradually, and not suddenly increase your mileage, as this is more likely to cause injury. I decided that despite my stiff granny knees, I would try doing a couple of “shake out” runs that week to avoid having to make up the distance later on, as well as beginning to get back to building my leg strength and stability.

The runs weren’t great, but I got them done, and surprisingly there was minimal pain. I decided to spend some time building up a proper training plan, scheduling in gradual distance increases, rest days and specified time for stretching, strength training and conditioning to minimise risk of injury.

I’m now on week 5 of my 10 week program, and I haven’t had any further injury. My knees are still grim to listen to should I squat, and I can feel them when I walk up and down stairs, but I haven’t experienced any major pain since the Welsh 3000s. I have begun to notice some weakness in my left ankle, which I intend on working on, but at the moment I have no reason to believe I can’t do this half marathon, even though I do have dodgy knees. I’m managing to fit in all the running I have scheduled, but some of the stretching and strength training hasn’t quite gone to plan. I feel though that as long as I try to fit it in when I can, I’ll be helping myself.

My next step now is to focus on ensuring I’m also getting enough hydration and sleep, to ensure my body can recover as much as possible. Weirdly, this seems harder to achieve than running, but I’ve got 5 weeks left to perfect it!

I currently have three goals for my half marathon based on how my knees continue over the next month:

Stay tuned to find out if this theory of moderation and prehab works for me, and if I make it through the half next month! 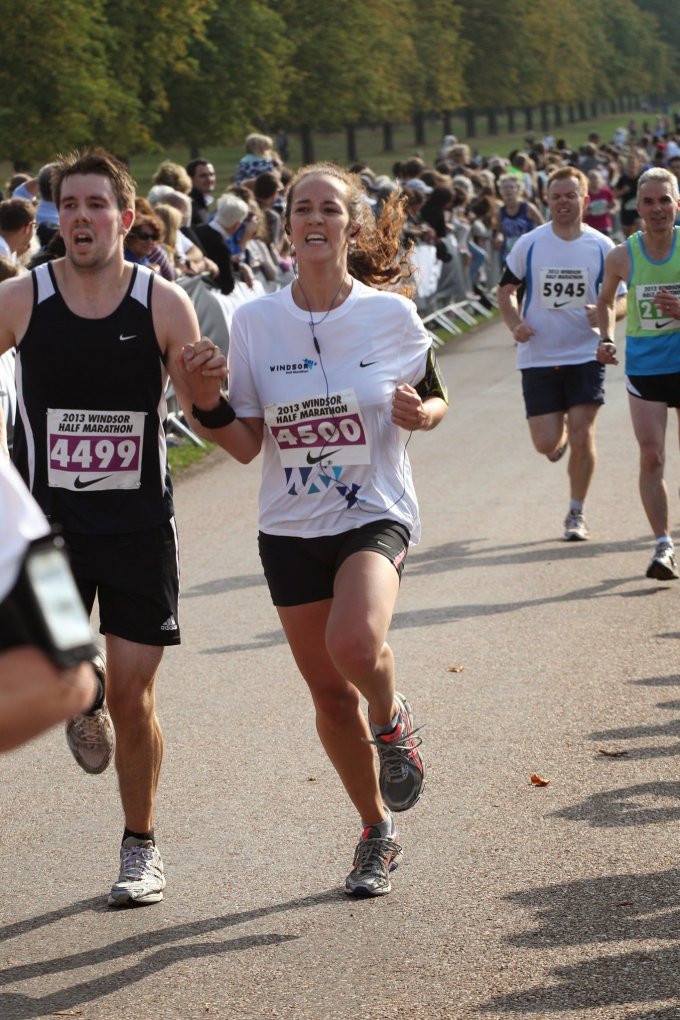